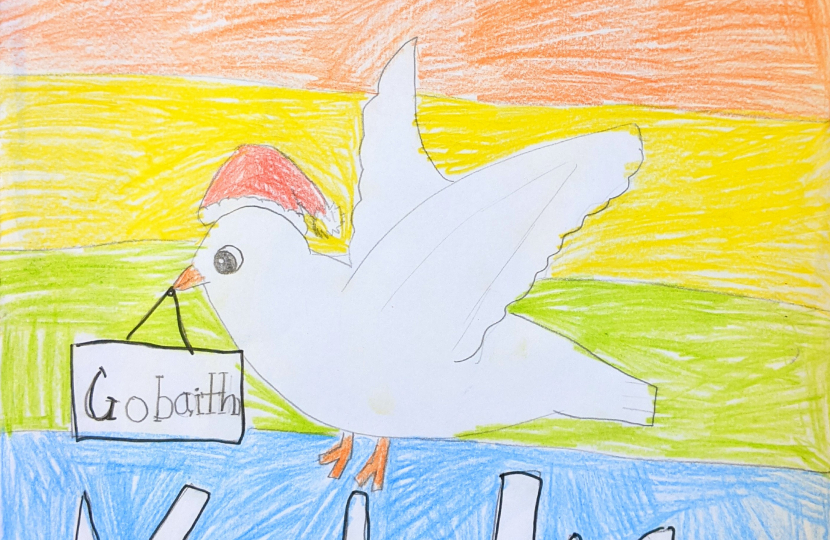 In what has been a difficult year for everyone, a 10-year-old school girl has helped Clwyd West MS Darren Millar deliver a message of hope to all those who receive a Christmas card from him this year.

Once again, hundreds of children from every corner of the constituency entered the competition and Darren’s constituency office in Abergele was inundated with designs.

The theme this year was 'Hope' and Darren and his team were impressed by the standard of entries from all ages, but eventually decided on Mali’s design.

“It has been a tough year for everyone and I was keen for my card this year to be based on the ‘Hope’ that we must all hold on to during these difficult times.

“Mali managed to design a card with colours of the rainbow, a symbol of hope that has been adopted by the NHS during the pandemic, and a dove, the universal symbol of peace. These are also biblical symbols that point to God's promises and presence in Jesus; hope born in Bethlehem 2,000 ago.

“The standard for this year’s competition was outstanding and I would like to thank all the children who obviously spent so much time and effort on their designs, but unfortunately there can only be one winner and Mali’s design really stood out to me. I am sure the hundreds of people who receive my card will appreciate her fantastic art work and the message it portrays.”

MS helps raise awareness of smear tests during the pandemic