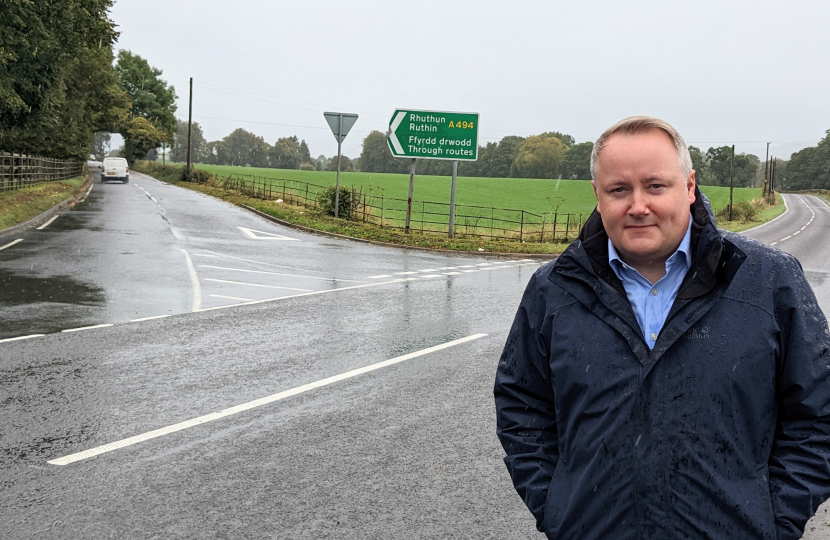 Clwyd West MS Darren Millar is encouraging residents to back a petition urging the Welsh Government to carry out improvements to Lôn Fawr and Corwen Road to make them safer.

Lôn Fawr and Corwen Road are gateways into Ruthin and part of a key circular route for traffic and residents, but parts of Lôn Fawr are dangerously narrow, which is not acceptable for a Trunk Road. In addition to this, the priority at the junction with Corwen Road needs re-engineering to improve safety.

Darren has therefore launched a petition to urge the Welsh Government to release the capital investment needed to carry out these improvements as soon as possible.

“This stretch of the A494 poses a serious risk to drivers, cyclists and pedestrians and I am regularly contacted by local residents raising concerns.

“By signing this petition, residents can send a clear message to the Welsh Government that improvements are needed urgently.

“I have highlighted concerns with of the Deputy Minister for Climate Change, so hopefully the Welsh Government will consider the views of residents and release the capital investment for improvements to be made at the earliest opportunity.

“People should feel safe on our roads and these improvements need to be carried out, and soon, to prevent accidents from taking place.”