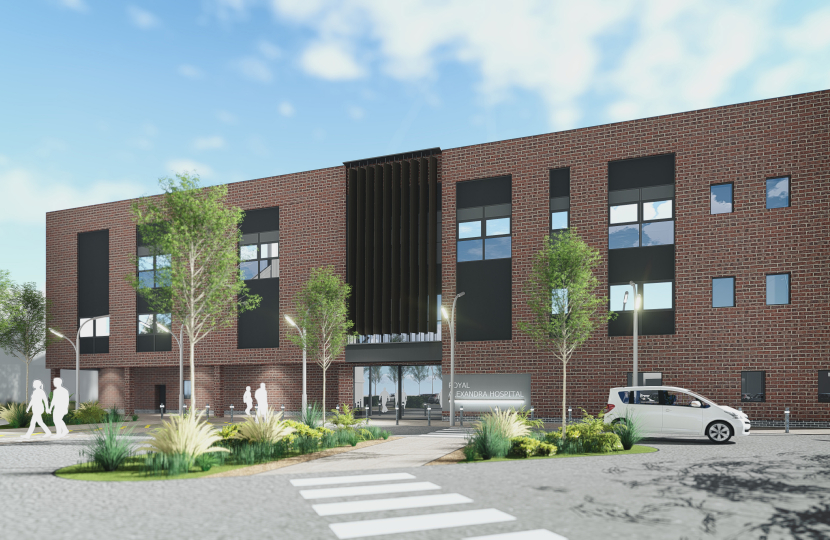 Vale of Clwyd MP Dr James Davies and Clwyd West MS Darren Millar have welcomed news that final plans for the new North Denbighshire Community Hospital are to be presented to Betsi Cadwaladr University Health Board at their meeting next week (November 12).

Both James and Darren have supported the exciting plans for the new hospital on the site of the Royal Alexandra Hospital in Rhyl since they were first mooted in 2012 and are therefore pleased that they progressing well.

As well as a new hospital, the project includes the refurbishment of the existing Grade-II listed hospital building.

Services will include community beds, a same-day minor injuries and illness service, a treatment zone, and outpatient therapy and IV therapy services.

“Having been involved in this project since its instigation, it is hugely exciting to hear that we are now at this stage and that these impressive new facilities and services could be available to the people of North Denbighshire in only a couple of years’ time if approved by the health board and granted planning permission, which I believe is imminent.

“This project has been desperately needed for a long time and I have consistently applied pressure to move it forward.  The main Ysbyty Glan Clwyd site has been overstretched for many years so this development will help relieve pressures there, whilst also making health services much more accessible for many residents of North Denbighshire.

“As I stated in my consultation response this development has the potential, following sympathetic renovation, to significantly contribute towards the resurgent town that we all want Rhyl to be.”

“It is fantastic news that we are finally at this stage; we were first promised this development it back in 2012, so it’s been a long time coming

“The new hospital will provide many of my constituents with the modern healthcare facilities they require and deserve. It will also help to relieve pressure on the Emergency Department and wards at Ysbyty Glan Clwyd and other community hospitals.”

The revised programme of work, if approved, would see construction work on the new hospital begin in March 2021, with an estimated completion date in February 2023.

The overall project, including the refurbishment work in the existing Royal Alexandra Hospital, would aim to be completed in September 2023.

If approved by the Health Board on November 12, the project will then be sent to Welsh Government for further scrutiny and approval.

Clwyd West MS Darren Millar has welcomed news that people across his constituency will have better access to Covid-19 tests over the next few weeks thanks to the opening of a temporary walk-in testing facility in Ruthin.