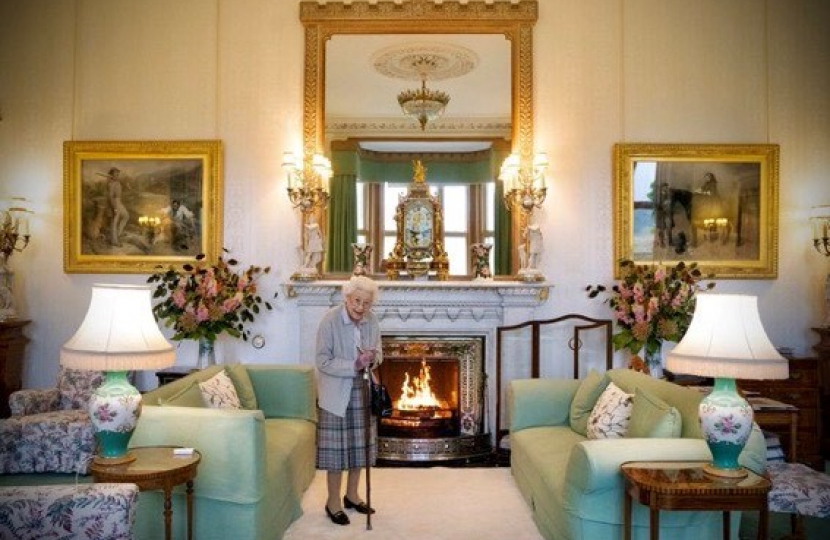 Clwyd West MS Darren Millar paid tribute to Her Majesty Queen Elizabeth II in the Senedd today recalling his first meeting with her at Colwyn Bay’s Eirias Park and extolling “her devotion to her nation, to her peoples and to our armed forces”, and “to God”.

The Senedd was recalled on Sunday, a day before it was due to return from Summer recess, to carry out a motion of condolence in honour of the former monarch who died on Thursday.

In his tribute, Darren said he has always had two photographs of Her Majesty The Queen in his office because  “the Queen felt like a member of my family”.

He spoke of the strength she provided to the nation during the darkest days of the pandemic and said her death has come as “a huge personal blow” to many people in Clwyd West, who had been in touch to ask him to “express on their behalf their deepest condolences to King Charles III and his family.”

Relaying the excitement he felt at seeing The Queen for the first time during the Golden Jubilee tour at Eirias Park, Darren said when news spread to the crowd that Her Majesty The Queen had arrived “There was silence, just for a brief moment, before the crowd erupted with cheers because the Queen had arrived. And that excitement was exactly the same every time I ever saw The Queen.”

He went on to commend The Queen’s devotion, stating:

“There are many different words that have been used in this Chamber and in other Parliaments and in other tributes to Her Majesty the Queen in recent days: duty, service, longevity, dedication, honour, dignity, grace, patience, commitment. But the one word that I think speaks most to me about the Queen, the one word I would use to speak of her, is devotion. Every time I look at those pictures in my office, I think of the Queen's devotion, her devotion to her nation, to her peoples, not just here in the UK, but around the world and in the Commonwealth, her devotion to our armed forces - she was the Commander-in-Chief of the British armed forces and the Colonel-in-Chief of both the Royal Welsh and the Welsh Guards - and her devotion to her family.”

Darren recounted the time he and his wife Rebekah spoke to Her Majesty at the opening of the Senedd in 2011.

“There was an opportunity for my wife to talk to the Queen, my wife spoke about our children and told her that our children used to love watching Prince William go up in the search and rescue helicopter, above our house on occasions, in North Wales, because, of course, he'd been based at RAF Valley for a time, working as a search and rescue pilot. And the Queen's face just lit up, because she was devoted not only to her nation, country, people, the armed forces; she was devoted to her family. She loved her family and grandchildren.”

Darren also spoke of Her Majesty the Queen's devotion to God.

“She made that pledge at the start of her reign. She made pledges in the Coronation, and she made pledges throughout her life, to serve God in the best way that she could, to be the best monarch that she could be. She very much fulfilled that role of being the Defender of the Faith, one of her official titles. She championed the Christian faith that was so central to her life. She spoke often of it, of course, during the Christmas broadcasts. But, even as recently as last month, she spoke of her Christian faith in a letter to the Lambeth Conference. And in it, she said this:

'Throughout my life, the message and teachings of Christ have been my guide and in them I find hope. It is my heartfelt prayer that you will continue to be sustained by your faith in times of trial and encouraged by hope in times of despair.'

“Well, I want to say this: thank you, your Majesty, for inspiring me and my faith over the years, and that of millions around the globe. We appreciate your service, and I'm grateful to have had you as part of my family over the years that I have been brought up.

“And I say this to the new King, Charles III: thank you for your service to us, as our Prince of Wales, over more than five decades. I, for one, have appreciated that service and know what an excellent ambassador the new King has been for us during his tenure as Prince. And I say this also, God save the King, and may God bless our new Prince William and Princess Katherine as they take on their new roles.”