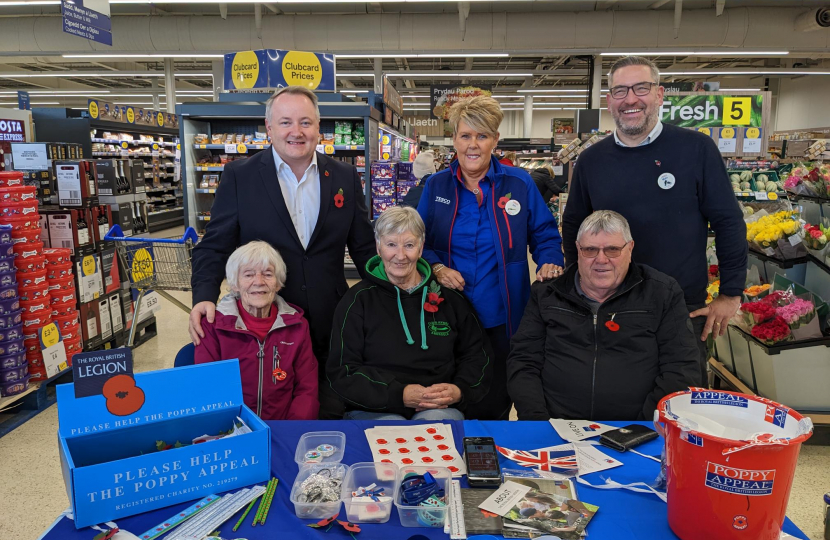 In Remembrance Week, Clwyd West MS and Chair of the Senedd Cross Party Group on the Armed Forces, Darren Millar, has spoken of his pride at the Welshmen and women who serve in the Armed Forces and thanked them for their dedicated and selfless service.

In yesterday’s Senedd debate on Support for the Armed Forces Community, Darren put forward a motion proposing that the Senedd “remembers and recognises the contribution of all those who have served and serve now in our Armed Forces, particularly those who paid the ultimate sacrifice” and  “Expresses its gratitude to the Armed Services in Wales for their continued contribution to Welsh Life.”

Speaking in the debate, he said:

“Like many in this Chamber, I will be laying a wreath at a local cenotaph in my constituency on Sunday, remembering those who've paid the ultimate sacrifice, and indeed those who survived wars but still paid a very heavy price, and their families, in the communities that I represent.

“We're all very proud in this Chamber to support our armed forces because we know that they are such an important part of the local communities that we represent. From Valley, to Brecon, to Cardiff, armed forces families are at the heart of our communities.

“We know that our armed forces have been critical to the defence of Ukraine. Whilst not on the ground in Ukraine or flying in the air over Ukraine or in the sea immediately adjacent to Ukraine, they, alongside our intelligence services, are a very important part of supporting and equipping Ukraine in the face of the Russian invasion. The Royal Welsh has taking part in exercises in Estonia, with other NATO allies, in order to support the alliance and make sure that it's as strong as possible, given the greater threats that we now see in the world, unfortunately, as a result of Russian aggression.”

“We are blessed to have a very active cross-party group that takes a great deal of interest in all sorts of matters pertaining to the armed forces community, and we're very pleased that progress is being made year on year to support that community.

“We were delighted that one of our long-standing calls for a Veterans' Commissioner for Wales was finally delivered, in the form of Colonel James Phillips from Pembrokeshire, and I think that he's gotten off to an excellent start.”

Darren also welcomed the Minister’s confirmation that Armed Forces Liaison Officers will now be funded on a permanent basis in Wales, but said he would like to see “much more engagement from some parts of the public sector in supporting our armed forces community”.

“In conclusion, I just want to say 'thank you' to all those who are serving and who have served across this great nation of Wales, we salute you this weekend.”