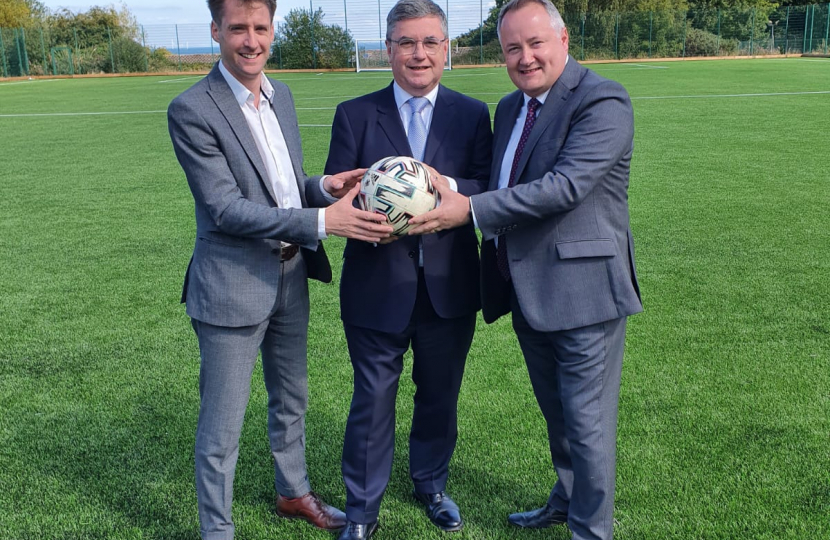 The Secretary of State for Wales, Robert Buckland MP, joined Clwyd West MS Darren Millar and North Wales MS Sam Rowlands on a visit to an Old Colwyn School last week to celebrate the £180,750 funding they received from the UK Government to improve sports facilities at the school.

It was announced earlier this year that Ysgol Bryn Elian was to be one of seven North Wales projects to receive funds to improve grassroots sports facilities.

The school was awarded £180,750 which was used to convert an old sand-based pitch at the school’s grassroots facility into a new 3G surface, allowing it to be used all year round. A further £50,000 was provided out of the school’s own resources.

The money also paid for the replacement of the floodlights to allow the school to expand its sports provision and cater for the increasing demand for facilities locally, including girls’ football and disability sports.

The Secretary of State for Wales visited the school with Darren and Sam to see the new facility.

“I am delighted that Ysgol Bryn Elian was one of seven projects in North Wales selected to benefit from this funding. The new pitch looks fantastic and pupils and staff at the school are thrilled with it. They have been trying for almost 10 years to secure funding for these improvements, so this investment from the UK Government was very welcome indeed.”

“A total of 17 schemes across the whole of Wales split a total £1.3 million of UK government money to create and improve pitches, changing rooms and pavilions.

“The funding is part of a major commitment by the government to level up access to physical activity across the country. I was very impressed by the new pitch, it is a great asset to the school and the local community.”

The Secretary of State for Wales, Robert Buckland MP, said:

“It was a great pleasure to visit Ysgol Bryn Elian in Old Colwyn, to meet with the Headteacher Dave Humphreys, school governors and a representative of Football Association Wales (FAW), and to be shown the new pitch which will benefit local children greatly.

“17 projects across Wales received funding to create and improve pitches, changing rooms and pavilions, so that more local communities can access high-quality facilities. The grant to Bryn Elian was the second largest in Wales.”